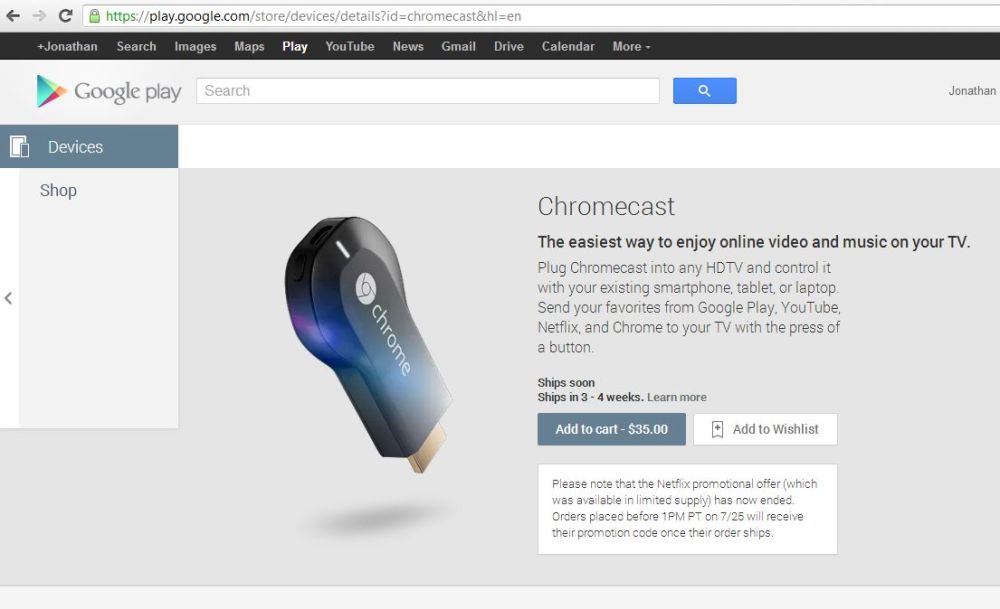 Last week, seemingly out of nowhere, Google announced Chromecast. It’s an HDMI dongle that allows you to stream content to your TV from the cloud using almost any device connected to the same WiFi network (yes, it works with the iPhone and iPad as well as Android devices).

You simply plug the device into an HDMI port on your TV and plug it into a power source (my TV has a USB port right beneath one set of HDMI ports which is quite convenient. It also comes with a power outlet adapter) and you’re (almost) ready to go. Once it’s set up you’ll see a Chromecast button in supported apps and you simply click the button and Chromecast will begin streaming the content on your TV. You can control the content with your device, but you can also exit whatever app you launched the video from and continue using the device while the Chromecast continues streaming.

I have yet to discover if that’s a process you have to go through everytime you use the device on a new WiFi network or if it’s simply for the initial setup. I hope it’s the latter because otherwise it won’t be as convenient of a device as it could be. Sure you don’t have to carry around an HDMI cable, but fooling around with router settings every time you go somewhere new would be a chore.

Overall I’m impressed with the device and for $35 it’s a steal. It initially came with 3 months of Netflix, however due to overwhelming demand Google had to remove that offer (luckily I got in before it disappeared). I’m also impressed that it works so easily with iOS apps, though as of right now you cant use it with the Chrome iOS app (it does support the desktop version). At the moment you can use it with YouTube and Netflix on iOS (I’m not sure if there’s a Google Play app on iOS, but I assume if there is that would work as well) and there should be more content to come in the near future.

I’m on my lunch break right now but wanted to share this amazing SiriusXM exclusive acoustic performance of “Chocolate” by The 1975. The song is incredible in the first place, but this version is just incredible.

The 2013 Steam Summer Sale is nearly over. With just two days of deals left I find myself having just over $10 left of the $50 I allotted for the sale. Lately, however I haven’t found much of anything worth purchasing.

So far I picked up NBA 2k13 (so far my favorite pickup of the sale), Alan Wake Franchise (Alan Wake + Alan Wake: American Nightmare), Deus Ex: Human Revolution, Poker Night 2 and Dirt 3. I have only played NBA 2k13 and Poker Night 2 so far and I enjoy both of them.

Collecting the Summer Sale trading cards was a bit of fun and I was able to complete my level 1 Summer Sale badge. The addition of trading cards in various games is also a welcome change which might just get me to play more games in my library that would otherwise sit untouched.

How has your Summer Sale been so far?

In today’s VLOG (recorded 9 July) I take a look at my 360 collection and offer a few thoughts on some of games.

A video of me playing Super Mario Bros. 3….Quite badly.

After a day of painfully slow uploading my 4th of July videos are finally ready for viewing!

First up is Boise’s firework celebration at Ann Morrison Park. It was a lot of fun and a really good show. It was my first time viewing the fireworks in Boise so the only thing I have to compare it to are the celebrations from back East and I’d say it was right on par with those.

After the fireworks at Ann Morrison we walked back home (so glad we walked, traffic looked painful) and collected our fireworks before heading to another park where we set off a variety of rockets, mortars, fountains and roman candles. I have to say I definitely bought too many fireworks and we didn’t use them all (not sure what to do with the rest at this point).

Just a quick vlog about the Ultimate Game Sale

So as of 9AM Mountain Time the Day 3 Xbox Live Ultimate Game Sale games are still available at their sale prices, along with Day 4’s titles! If you missed any of the great deals from yesterday you still have a little time to take advantage of the incredible prices!

Some people feel the Day 4 sale prices should been lower, but when you compare to GameStop’s used prices they’re still great deals, especially when you consider the convenience of owning a digital copy. Bioshock Infinite currently sells for $54.99 used, while XCOM sells for $37.99.

If like me you missed Far Cry 3 on sale for $19.99 during Day One of the Xbox Live Ultimate Game Sale don’t kick yourself too hard. Right now both Best Buy and Amazon are selling the 360 version of Far Cry 3 for $19.99! The digital version has gone back to it’s $59.99 price on the Xbox Live store, while new copies are currently selling for $59.99 at GameStop and other retailers (it’s $39.99 used right now at GameStop).

I would’ve greatly preferred the digital version (I HATE physical media, I want all my games available to play at any time on my Xbox’s hard drive) but the disc version is still a steal at $20.

Today The Witcher 2 is on sale for $9.99 through the Xbox Live Ultimate Game Sale and Forza Horizon is a bargain at $14.99. Keep your eye on Major Nelson’s blog as more AAA titles will be on sale this week including the recent GOTY candidate, Bioshock Infinite!

I ordered my copy of Far Cry 3 for in store pick up at Best Buy via their website. While I was in the store I noticed Far Cry 3 is still priced at $59.99. I’m not sure if the sale price would take effect in the store, but if you want to save yourself the hassle I’d recommend ordering online for in store pick up. It only took about 15 minutes to receive the e-mail that it was ready for pick up (ensure it’s in stock at the store first, otherwise it’d have to be shipped there). Or just order Amazon if you prefer.

I’ve just had bad experiences with Best Buy and sale prices…Like a few years ago when there was a sign in store advertising FIFA World Cup 2010 for something like $15 but when I got to the register they insisted the sale was over and no such sign existed in the store (after they went and saw for themselves I eventually got the advertised price).