I have a bit of a Saturday morning tradition of dragging Vanessa with me to the Starbucks just around the corner and having a coffee (usually iced vanilla coffee) while reading the (digital) New York Times and skimming WordPress. It’s a nice and relaxing way to spend 30 minutes or so in the morning before we decide what to do with the day. It’s also nice to get out of the house. My brain always feels more productive when I’m sitting somewhere other than at home sipping on a coffee. In college I’d always take my coffee to the second floor of the library to read or write while overlooking the trees and smoke stakes of the city in the distance. I’m not sure whether it’s the brighter lights or the act of being somewhere with less distractions that puts me into a good, productive mood. 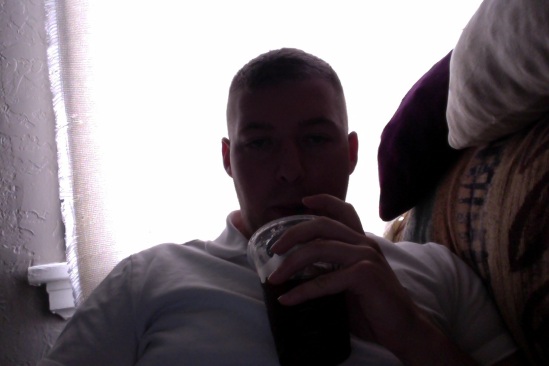 Unfortunately, this morning there weren’t any seats available so we had to take our coffees back to the house (I would’ve been willing to sit outside, though it’s a bit chilly and now starting to rain). So for now I’m drinking my coffee while listening to SiriusXM’s The Coffee House with the Penn State game taking my eyes away from the page (or screen rather).

I suppose this isn’t so bad. Do you have any particular way you like to drink your coffee? Am I just crazy? 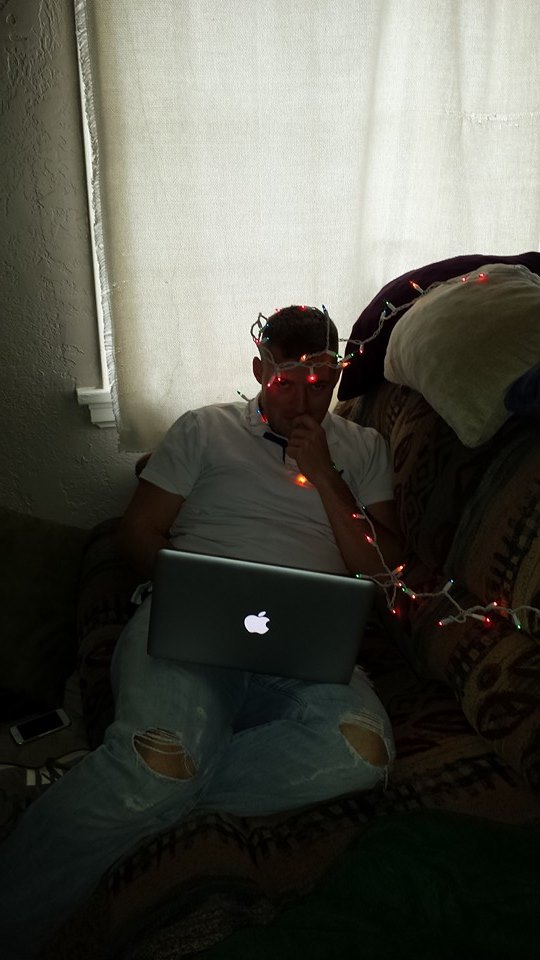 Thanksgiving this year was great. It always sucks being away from family during one of my favorite holidays, but I’m grateful that I got to spend Thanksgiving with Vanessa and her family and the food and company were great. The Ravens went on to narrowly defeat the Steelers which was also a plus. I thought for certain the game would go into overtime for the third time this year and I’d have to hold my breath longer. It was certainly an nerve wracking victory.

We didn’t really do a whole lot of Black Friday shopping. All of the sales were starting at 6pm on Thanksgiving which is not something I think should happen. We slept in this morning and headed over to Barnes and Noble just to look around. I was tempted to purchase the Nook Simple Touch which was $39, but I have a feeling Kindles will be on sale on Amazon Monday. If not, oh well. I used to have a regular Kindle and then a Kindle Fire HD, and for awhile I used an iPad but I no longer have any of those and do all of my reading on my MacBook (via iBooks and Zinio for magazines) and my iPhone. I’d like to have a Kindle so I can read in bed without having all of the other distractions my MacBook and iPhone offer. I’m hoping the Paperwhite goes on sale again since it sold out in a matter of seconds during the Kindle Fire offer.

I hope you enjoyed your holiday and Black Friday shopping if you participated! I’m certainly enjoying the long weekend.

I received one of my favorite holiday snacks in the mail from Pennsylvania. Stauffer’s Chocolate stars. I was quite surprised last year when I found out that these were nowhere to be found out here (in Idaho). 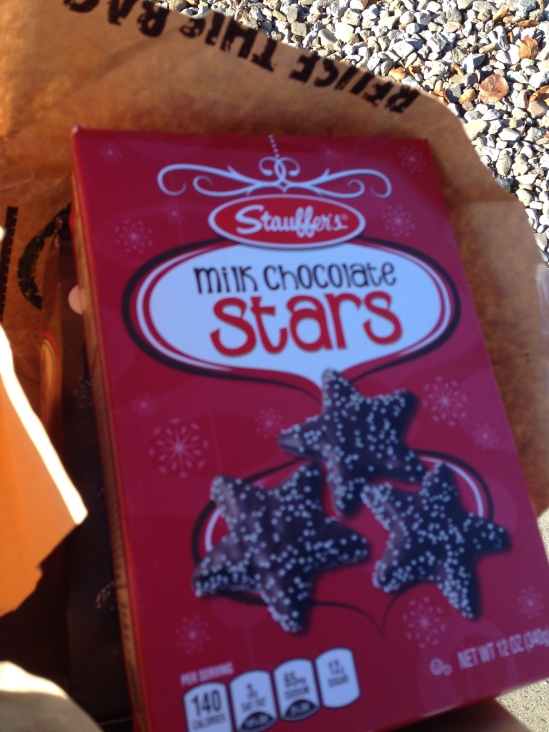 Vanessa and I just before the Ravens and Steelers game. 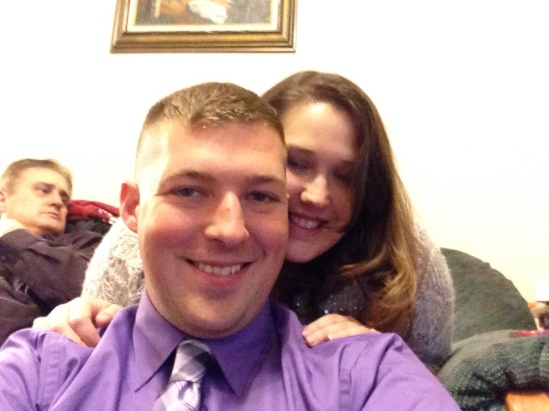 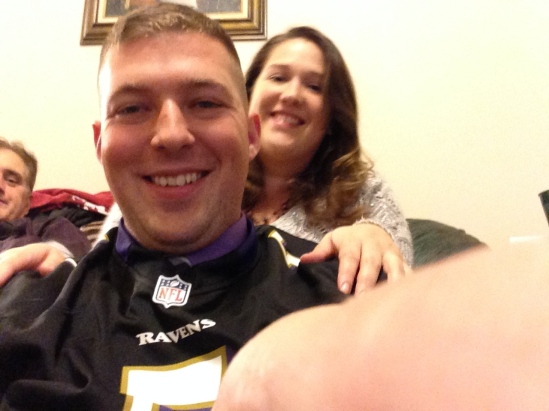 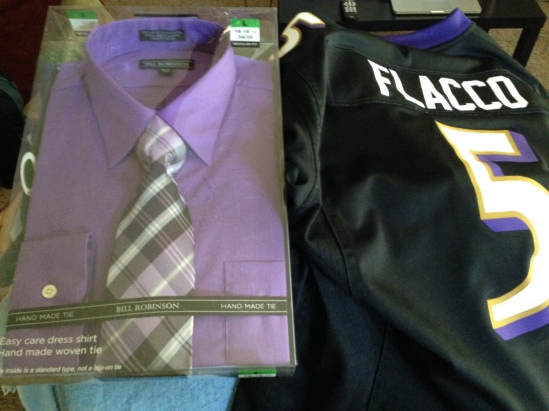 I hope you’re having a great Thanksgiving so far. We’re having dinner at 6 and the Ravens – Steelers game starts at 6:30! I’m quite excited to see the Ravens play on Thanksgiving and hope we avenge the tough loss to the Steelers in week 7.

I started playing Assassin’s Creed IV: Black Flag last night. The only Assassin’s Creed games I’ve played are the first one (got bored after the third assassination), the second (made it a handful of hours before not playing anymore) and Assassin’s Creed III (which I played until you arrive in Boston and didn’t get interested in).

Hopefully this game will hold my attention longer. So far it seems pretty good. I like the environment and piloting ships seems like it’ll be pretty cool. I don’t really like the part where you come out of the Animus though. I know all of the games switch between the real world and the Animus, but I wish the game would just take place entirely in the past. I don’t care for whatever story they’re making up to explain everything, and I don’t care for the characters or environment in the present either. Maybe if I had played the other games I’d understand more, but all I want to do is play as Edward Kenway.

Tonight was an interesting night on TV kicked off by the next to last episode of The Walking Dead this year (which has its mid-season finale next Sunday). This ‘Governor’ centric episode was more exciting than last week’s and the arc will climax next Sunday in what is sure to be the most action packed and dramatic episode yet. I’m looking forward to it because I feel like this season has started off slowly. Unfortunately, I’m sure we’ll be left with a cliffhanger and will have to wait until spring to continue watching. I’m not a huge fan of the split season format, but I guess it means we get to enjoy The Walking Dead through more of the year.

Next we watched the latest Simpsons and Family Guy. I have to say the killing off of Brian Griffin was quite tragic and I’m not entirely happy with the decision. We knew going into the year a Griffin was going to be killed off, but I entirely expected it to be Meg or Brian since they’re not voiced by Seth MacFarlane. The new dog, Vinny, is not an enjoyable character and not at all a suitable replacement for Brian. I understand they wanted to shake things up, but I can honestly see myself losing interest in the show with one of my favorite characters gone.

We also watched the premiere of the new HBO series Getting On, which started its 6 episode run tonight. Getting On is based on the British TV show of the same name and is a comedy that takes place in a hospital’s geriatric extended care unit. I figured we’d give it a try as Vanessa works in a retirement home and we figured it’d be amusing. It seems like a good show so far. The show stars Laurie Metcalf (Jackie from Roseanne) as Dr. Jenna James who is quite obsessed with her fecal matter study. Alex Borstein (the voice of Family Guy’s Lois Griffin) plays head nurse Dawn Forchette. I look forward to seeing how the series progresses.

Lastly we got back into Showtime’s Masters of Sex by watching the third episode. We have the series DVR’ed and I look forward to watching more of it during the long holiday weekend. It’s a good show that seems reason enough to keep Showtime for now. The plot is starting to thicken and I can’t wait to see where it goes next.

Dragon’s Dogma: Dark Arisen is one of the recent free games available via Playstation Plus so I decided to give it a try. I tend not to like Japanese games and upon seeing the Capcom logo I knew I probably wouldn’t like this  game. I played about the first 30 minutes and so far it’s not horrible but I can’t get over the Japan-ness of the game. What I mean is mainly the UI. It’s absolutely ugly. I hate the way the numbers look (and that they’re even there) and the flatness of everything. It reminds me of Devil May Cry, another game I might have liked if it weren’t for the UI (and horrible anime acting). It also looks a bit like Dark Souls which also has one of the ugliest UI’s of any game I’ve ever played.

Lastly I’ll just add that the game looks quite ugly at some points. I don’t remember games like Dragon Age looking as ugly as this game does (mainly the character models). The voice acting and story are also remind me of some sort of anime. I mean a dragon rips your heart out and essentially tells you ‘come at me bro’ and now you’re on some epic quest to get your heart back….really?

So I might keep playing, but if you can’t tell I hate Capcom and just about any game designed by a Japanese developer.