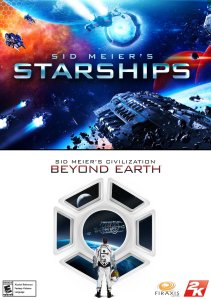 I noticed yesterday that Amazon was selling a bundle that includes Civilization: Beyond Earth and Sid Meier’s Starships for $29.99, which was tempting. I had been wanting to check out Beyond Earth since its release last October, but the mixed reviews made it sound disappointing. I had also thought about buying Starships on the iPad several times, however the reviews of it also kept me from making the plunge.

I absolutely love Civ V and Revolution 2, however I don’t often find the time required to play them. I’ve put a little more than 20 hours into Civ V and probably at least 8-10 into Revolution 2, however between the two games I’ve actually only finished maybe four or five games (against AI). Combined with the fact that I’m trying to replay through the Fallout games on PC and still have Witcher 3, FIFA and Halo to occupy my time on the Xbox One, I’m not quite sure I’d be able to give Beyond Earth the time it deserves.

$30 for both games certainly seems like a steal (considering they’d total $65 together at their normal retail prices), but I don’t feel an immediate need to own Beyond Earth either.

Steam is making my decision even more difficult as it has the same bundle available for $26.99 which almost seems too good to pass up. But do I really need these games? Do you recommend checking them out?