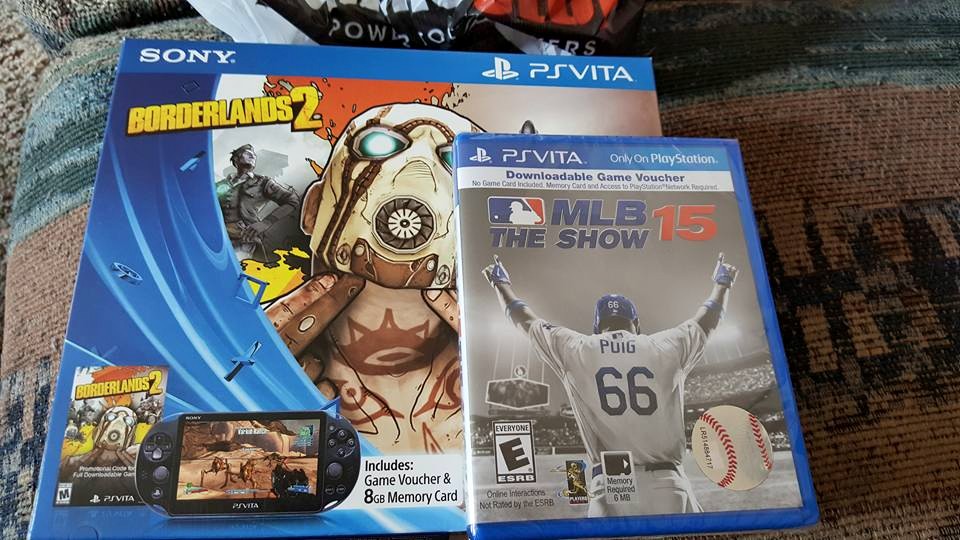 This weekend I finally got around to picking up a Playstation Vita. I had been thinking about it for awhile, especially after I bought a PS TV and started playing Final Fantasy X HD and Persona 4 Golden on it. I felt like those games would play much better in a mobile environment as I never really had the motivation to boot up the PS TV. I finally took the plunge and picked up the Borderlands 2 bundle for $199 at GameStop (they accept Google Wallet by the way!).

The bundle comes with a voucher for Borderlands 2 (and its DLC) and an 8GB Vita memory card. 8GB isn’t very much, especially if you’re going to be downloading games, but my PS TV also came with a 8GB card so for now I’m using that and will throw in the new card when I want to download more games.

So far I’m enjoying using the Vita. It feels good in the hands, it’s not too heavy and the screen looks pretty darn good! The system also produces a decent amount of sound and it sounds pretty good when using the speakers.

The UI definitely navigates better using the touch screen when compared to navigating it on the PS TV, so that’s a plus, but I still think the Playstation UI is pretty ugly.

As of right now I own Final Fantasy X/X-2 HD, Persona 4 Golden, Borderlands 2 and MLB The Show 15 (which I bought in the store as a redeemable voucher only because it was $19.99 at GameStop and $40 on the Playstation store). The only game I’ve played so far is Final Fantasy X, but it plays great on the Vita. It’s nice to pick up and play for a bit here and there and will be great for my bus trip next week.

I’ve been browsing the store and nothing else is really popping out at me. I had often heard that Vita support is pretty subpar, but hopefully I’ll find some more things to check out. I’m thinking about picking up Metal Gear Solid HD collection as the only MGS game I’ve actually finished is MGS2 on the 360. Do these games play well on the Vita?

Do you have any recommendations for must own Vita / classic games? Let me know please!