My month in Las Vegas comes to a close this weekend, and I’m both incredibly excited to return to Boise  and a bit sad to say goodbye to the wonderful city of Vegas. I jokingly call it a vacation, but in reality I’ve been down here for Red Flag.

I had never visited Vegas before, so a lot of my preconceptions about the city were formed from TV and film. I expected the strip to be extravagant while also wild and lawless. The city ended up being much more tame than I imagined, which was surprising.

First of all I was incredibly surprised by the amount of children I saw on the strip, even late on Friday nights. There are kids everywhere, even in the casinos. I saw a ton of children in their early teens wandering around the casino floors on their own during all parts of the day which I didn’t expect at all. It almost made me feel a little awkward carrying around a 50 oz margarita in a souvenir cup shortly after noon. Almost.

It was a bit jarring to see children with their parents pass by the guys on the street corners and pedestrian bridges peddling escort cards. One evening we were walking back behind a family as two young boys trailed their parents gawking at the cards of naked women discarded all over the ground.

The city was not nearly as wild as I had imagined it would be. Sure you can carry drinks up and down the strip at any time of the day, however there were no crazy Hangover like moments to be witnessed. There were groups of scantily clad parading bachelorette parties, and as amusing as it was to watch them drunkenly stumble down the strip, the majority of the foot traffic consisted of families and tourists.

Ultimately, Las Vegas is just another tourist attraction, not unlike Times Square. In fact, the street performers, costumed characters taking ‘tips’ in exchange for pictures and all of the people trying to push their mixtapes on everyone passing by reminded me all too much of the annoying parts of every New York City trip.

It may sound like my Vegas experience was overly negative, but that’s not true at all. My impressions were way off, but I still had a great time!

I didn’t really fall in love with the city until Vanessa visited this past weekend. I’m staying on base for work, so only really experienced the city on the weekends, and this past weekend was the best yet! We stayed at the Luxor Friday and Saturday night and packed a ton of fun into the weekend before she had to fly back Sunday.

I had a great time enjoying drinks by (and in) the pool Friday afternoon. Standing in the water sipping an ice cold margarita in the blistering sun was pretty awesome (though we payed for it with some mild sunburn).

Gambling was fun, but luck certainly wasn’t with me. I played roulette for the first time and failed miserably. I had my mind set on a number (15) and the first table I walked up to it hit my number before I could place a bet. This was frustrating and put the dangerous “I could’ve won big” thought into my mind. After throwing a few $10 minimum bets at 15 on another table I decided to call it quits. Before we left my friend and I bet red and black, figuring one of us would win at least. It hit 0. I decided to try roulette again and Vanessa won money rather quickly at the table. I figured I’d stick to just betting colors, and kept betting red. It hit black six times in a row, which seemed absurd, and on my final bet the game decided to spit in my face by landing on 0. I don’t think I’ll ever play roulette again.

Slot machines were much more fun, and on some machines $20 could last almost an hour and bring in a few free Coronas. Earlier in the trip I made the mistake of buying my own beers in the casinos, while also gambling. Being impatient doesn’t really pay in Vegas.

Friday night we saw Blue Man Group which was a blast. I had seen them in Orlando before, and while much of the show was similar, there were a few new things. We were seated behind a family with something like four kids who kept screaming and talking loudly, which again was annoying (why so many kids in Vegas??) but the worst part was the mom kept taking pictures and posting them to Facebook every few minutes. Nothing ruins a show quite like a phone popping up in your view followed by the bright light emanating from Facebook. Not cool.

Saturday was just as exciting. We gambled a bit more and headed to New York, New York to check out the roller coaster. Vanessa had never ridden a roller coaster, and had always been deathly afraid. With a lot of convincing we got day passes and eventually made it onto the ride(with a lot of kicking and screaming from her!). As we were ascending we saw the thick smoke from the pool fire at The Cosmopolitan (well I did, her eyes were shut). The roller coaster was fun, although at times painful because of the sunburn. We rode again awhile later and intended to ride it once at night as well, but the line was absurdly long later that night and we were exhausted so we skipped it.

We met up with some of Vanessa’s friends for dinner at Hash House a go go which was delicious, and after the meal I was asked if I wanted a to go cup for my margarita. Only in Vegas! I ended up pouring it into my empty 50 oz souvenir cup and we headed to the High Roller observation wheel. The wheel was wonderful, and we spent an awesome thirty minutes taking in the view of the city after sunset. I highly recommend riding the wheel. We arrived shortly after 8PM and there wasn’t much of a line at all, but as we disembarked half an hour later the line was incredibly long. I definitely recommend heading there just as the sun sets, it’s wonderful. 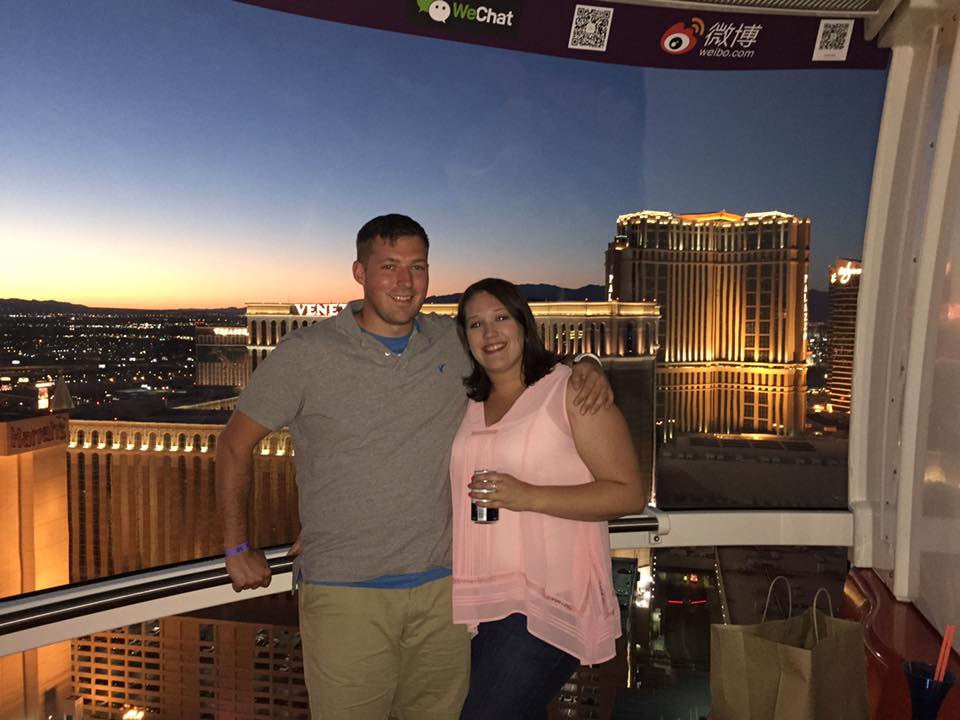 This ended up being a little long-winded so I’ll simply wrap up by saying it’s been a great month in Vegas, but last weekend was one of the most incredible experiences I’ve had anywhere. I can’t wait to make a return trip to Vegas, but until next time, thanks for the memories!