Fallout Shelter has been frustrating me lately. I can’t quite figure out why I’m playing it and yet at the same time I can’t seem to walk away from it. Fallout Shelter is Bethesda’s free to play game in which you manage a Vault in the Fallout universe, launched alongside the Fallout 4 reveal during this year’s E3. It is currently only available on iOS devices, however it is set to release on Android platforms on August 13th. 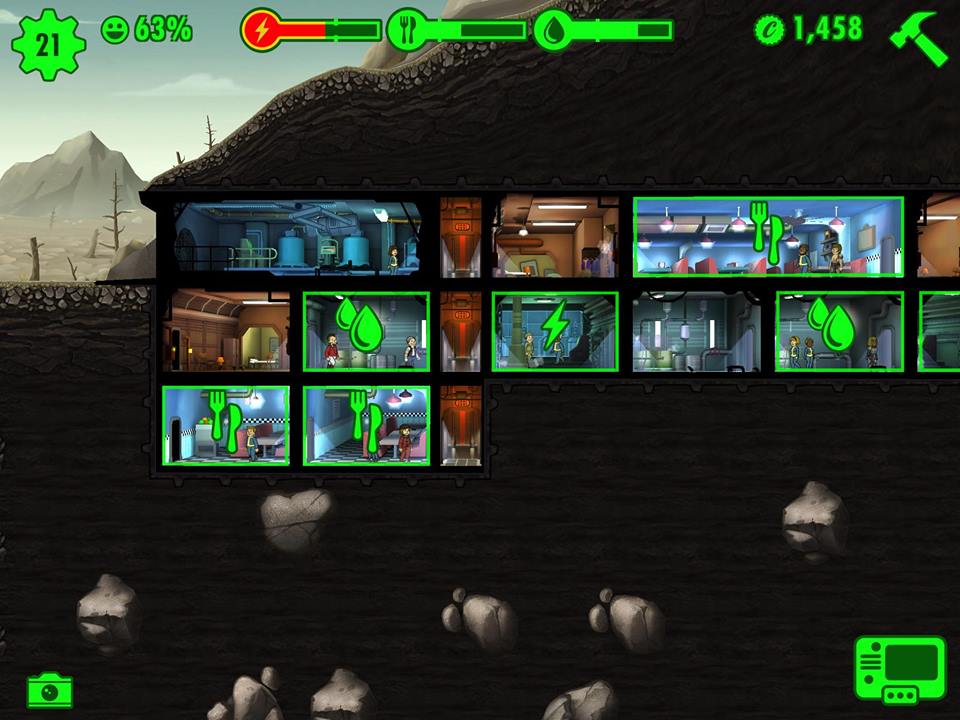 Fallout Shelter is simple to play. In it you construct various rooms and assign vault dwellers to work in those rooms to produce resources. Each vault dweller has a unique set of stats and each room requires a certain stat in order to run efficiently. You need to produce electricity, food and water in order to keep your vault running smoothly and your dwellers healthy. You can also send your dwellers into the wasteland in order to earn experience while searching for caps (currency), weapons and outfits.

The game doesn’t pressure you to pay in any money, however you can purchase sets of card packs starting at $0.99 for one pack. These card packs will provide you with either more caps, resources, weapons, outfits or even special vault dwellers. Each pack will include at least one rare item (such as a vault dweller or outfit) and they make doing well in the game much easier.

Opening the packs is one of the most exciting parts of the game, so last week I bought my first card pack (a set of 5 for $3.99). I got some pretty cool weapons and a few special vault dwellers with high stats. It was pretty exciting and I felt like my vault was well on its way to prosperity. Not more than thirty minutes later a radroach outbreak occurred, and as I tried to fight the roaches off every single one of my vault dwellers was killed. At this point my vault was doomed. I didn’t have the caps to resurrect any of my dwellers, and I couldn’t see anyway to advance the game.

I should’ve quit the game then, but having just spent four dollars on the game I felt the need to try again. I started a new vault and was a little disheartened to find that my card pack purchase didn’t follow to the new game. I sped through the initial setup and found myself purchasing another $3.99 card pack to get a jumpstart on my vault. This time I determined not to rush any of my production (rushing carries the risk of causing accidents such as fires or radroach invasions). I also decided not to expand too quickly which left my resources spread too thin in the first game. Since then things have been going well, however I’m constantly asking myself why I’m playing this game, and why I’ve spent $10 on card packs in just one week.

Playing the game itself provides little reward, and it seems like the only fun comes in opening card packs. You can earn card packs for free by completing objectives, however you can only hold three objectives at any one time and most of them reward you with a measly 25 or 50 caps. There doesn’t seem to be much of a point to expand my vault further, yet having spend ten dollars on the game I can’t bring myself to delete it from my iPad.

Are you still playing Fallout Shelter? How has your experience with the game gone? Should I just quit before I spend any more money on it?