Last Sunday night The 2016 EVO Championship finals were broadcast on ESPN2, and it seemed to reignite the debate about whether eSports belong on ESPN or on television in general. Some people have argued that gaming has no place on a sports network, while others counter that some of ESPN’s popular programming includes poker, also not a sport. I decided to sit down and watch the ESPN broadcast of the EVO finals (available online via ESPN3) and see what all the fuss is about.

I should start by saying that I’ve never been able to get into any eSports. I’ve tried watching competitive League of Legends, DOTA and CS:GO (which has a league that airs on TBS) and none of it has ever made sense to me. I can’t wrap my head around how people become fans of particular competitive video game players.

Watching the “ring announcer” of sorts introduce the players came across as a little awkward, or maybe overhyped. I’m sure it’s because I just don’t understand the fandom around the whole thing. I can sympathize with the confusion of those who happened across the EVO broadcast while channel surfing, even though I’m someone who’s into gaming, I still scratch my head when I hear announcers and commentators getting incredibly excited about people playing video games.

The broadcast did do a good job of offering viewers a crash course on Street Fighter for those who know very little about it. I haven’t played Street Fighter since the SEGA Genesis, but I could at least somewhat figure out what was going on thanks to the explanations. Once the matches started, however, I was entirely lost once the matches started. They would spout of words that had no meaning to me, and I cringed when one of the announcers said the word “strat” during a match. I think they could have done a better job of “dumbing down” the terminology if they wanted to appeal to a mass audience. 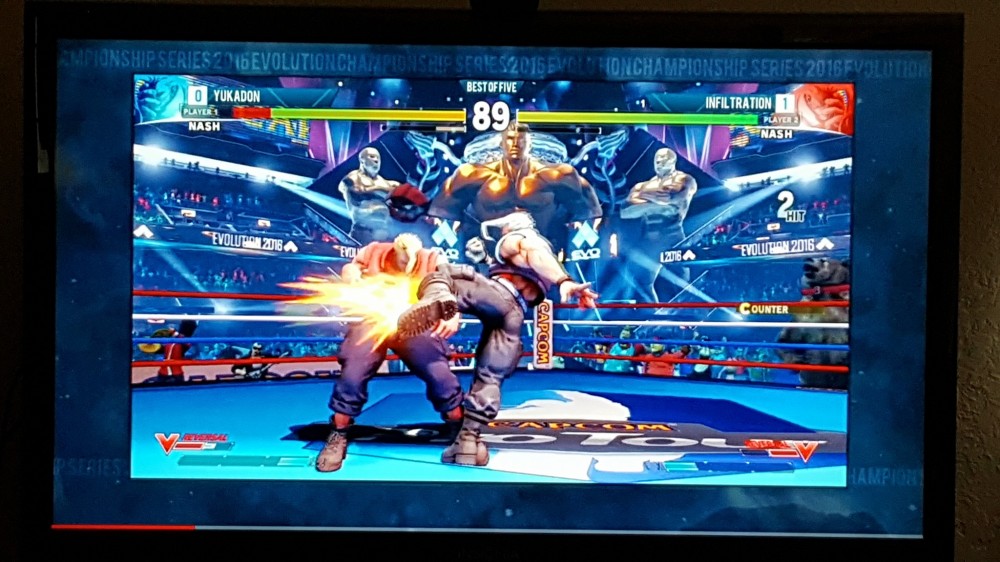 Now am I going to say that eSports have no place on ESPN? Not quite. As a sports fan, even I don’t spend a lot of time watching ESPN anymore. In fact, most of the time the only time I actually watch it is when it’s on at the gym. I have MLB Extra Innings to watch baseball and I get any baseball news and highlights via the MLB app. I don’t need to waste time watching Sports Center anymore, I can get exactly what I want to see without having to watch an entire ESPN broadcast. I think this is one of the reasons that ESPN’s viewership has been hurting lately, and one of the reasons they’re trying to attract new audiences.

For an added perspective, Vanessa walked by while I was watching the broadcast and shook her head, saying something to the effect that “these people are dumb”. I can’t say I share that perspective, but that’s coming from someone who’s not into video games, and I feel like that sentiment is probably echoed by many of the people who are questioning why this was broadcast on ESPN. What I would say to the people who have complained about eSports on ESPN, is that not everything on a particular channel is going to appeal to everyone. I like sports, but am not interested at all in watching softball, basketball, cross fit competitions or the BattleFrog Race Series that is on ESPN as I write this.

Ultimately, I didn’t hate watching EVO, but I’m not certain I’d seek out future fighting eSports events. Part of it may be that I just don’t like fighting games. I’ve never had the patience to learn the moves, and have always button mashed my way through Mortal Kombat, and to this date have never won a match online in Mortal Kombat X (to be fair I’ve only played like 5 matches and never played again).

I might be more interested in watching competitions in games that I play, such as Overwatch, Madden or FIFA, but seeing as I don’t even enjoy watching people play those games on Twitch, I don’t think competitive play would be able to keep my interest either. It’s obvious that thousands (millions?) of people enjoy watching eSports. It’s not for everyone. It’s not for me. But I’m not here to tell you to ‘get your damn eSports off my TV’.