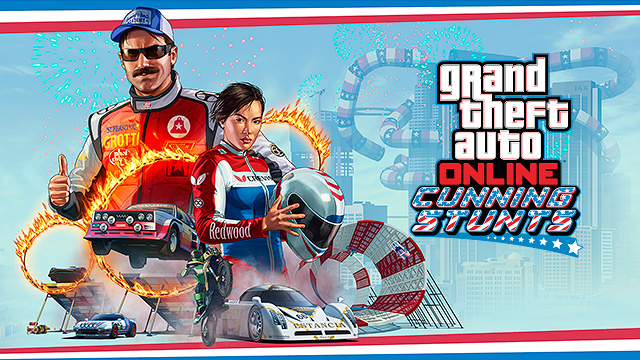 I had never really enjoyed the racing events in GTA Online, but Cunning Stunts mixes things up and makes each race a rush, whether you’re leading the pack or are stuck in the back. Some of the obstacles can make it easier to catch up if you’re falling behind as players might fall off the track once or twice during a tricky sequence. Last night I was about to win the second race of my GTA Online career, only to take a turn too harshly inside a tunnel which caused my car to smack into the ground and explode. The race was still exciting and led to this incredibly close finish:

I was able to have fun even while losing, because the jumps are fun and the tracks are bright, energetic and you never know what’s going to greet you down the road.

If there’s one complaint I have about Cunning Stunts, it is that some of the events I did seemed to drag on forever. I think that’s more a fault of whoever was hosting the session, however, and I’m certain some events would probably be best experienced as a single lap race, rather than multiple laps through the same jumps and obstacles.

I definitely enjoyed what I’ve experienced of the Cunning Stunts update so far and look forward to jumping back in for some more action in the future!