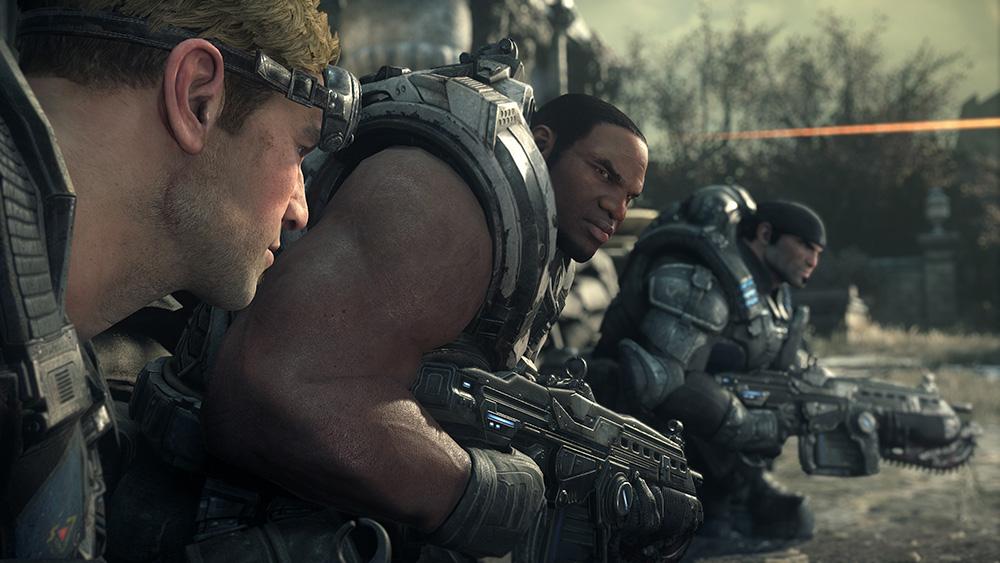 While I was back east visiting family my brother was able to take a week off and we spent a good chunk of that time playing through all of the Gears of War games in couch co-op. He had already finished the main series, while I had never finished any of the games. I never got into them, and was more into Halo and Call of Duty multiplayer while the Gears games were popular. I had played a few missions of Gears 2, but that was about it. I somehow came to own all of the Gears games, however (through purchasing Gears 4 and Xbox Game Pass) and decided it was finally time to play them.

We started with Gears of War: Ultimate Edition, and I was surprised at how good the game looked visually in addition to how well it played for being an eleven year old game. What surprised me even more was just how satisfying it was to shoot things in the game. I remember not liking Gear’s style when I first played it, however I came around to it quickly this time. I enjoyed the satisfaction of nailing a perfect reload and firing off amped up bullets after each successful reload. I also enjoyed the variety of weapons, and how each fired significantly different than the previous.

Had I not experienced the game playing side by side with my brother on a couch I’m not certain how much I would’ve enjoyed it. The way the game separates the player characters on occasion makes for some of the most tense moments in all of co-op gaming. Once you’re on a separate path from your partner you can no longer be revived if you make a mistake. Often one of us would breeze through our section only to watch in horror as the other was overrun and killed forcing us to replay the section. As neat as a mechanic as the two path system is, it did eventually start to cause frustration and I’m glad the sequels allow AI characters to heal player characters.

One of the most enjoyable experiences came when we found a way to cheat the system in a sense. We had failed a boss fight, and decided to figure out what would happen if one of us stood where the boss would spawn while the other triggered the encounter. We were able to end the boss fight before it even began in this case and both burst out laughing for a solid minute after it happened.

Switching to Gears of War 2 was a little jarring graphically after the beauty of Ultimate Edition, but once the action started I was quickly able to get past the muddier textures. Still, I wouldn’t mind seeing a remaster of 2 in the future as it would benefit greatly from a new coat of paint. Regardless, Gears 2 was an enjoyable experience with a bit more drama added to the story.

By the time we got to Gears of War 3, I was starting to experience a little bit of Gears fatigue. I’m sure this is mostly due to trying to power through the series in a matter of days (combined with the fact that I find it harder to tolerate long gaming sessions these days), but I think it started to affect my enjoyment of the series. In Gears of War 3, every sequence of events started to feel dry. You need to get somewhere and when you get there something will be wrong (no power, need to find something, etc.) and you’ll fight waves of enemies until you can get out of there and head off to the next place in the distance to do it again. Despite this, I did enjoy the grander scale of events that took place throughout the game. The game was more dramatic than the previous two, but also funnier at times (loved Carmine’s role!). Gears 3 did a great job at developing its characters and their motives, and it had more affect on my emotions than the other games.

In the final days of my visit we embarked on the start of a new Gears storyline in Gears 4. The game starts out feeling refreshing, with its new cast of characters and robotic enemies and I thoroughly enjoyed the opening act of the game. That fresh feeling didn’t last long, however, as it quickly transformed into just another Gears game with the same types of enemies and progression as the previous three. I felt conflicted as the game went on. On one hand it was nice to see the returning cast of characters fighting alongside the new generation, but I was left wishing they would’ve taken the game in a different direction. I would have enjoyed an outcast story, fighting robotic enemies not in an effort to save humanity (or delay their destruction it seems) but rather an effort to survive outside society.

I did enjoy the great visuals, sound effects and weapons, and ultimately I was left satisfied, even if I wished for something more. The variety of mission types, with ‘horde mode’ sections and wind storms were also a welcome addition to the Gears gameplay and I enjoyed the final boss fight, even if it was a little easy on our difficulty setting.

I’m glad I was finally able to sit down and complete the Gears series, as they were all solid games that were a blast to play co-op. It’s unfortunate that I missed out on such great games over the last eleven years, but playing all four in a week offered a unique perspective on the series. Playing them in close proximity to each other made all of their similarities stand out (which I’ve admitted may have hurt my enjoyment to some degree) and made them all of the games feel more cohesive. Overall I had a great time with the forty hours or so we spent playing the four games. You’ll notice I’ve omitted Gears of War: Judgement, which we didn’t play as we wanted to ensure we would have time to finish the main series. My brother has played Judgement and has assured me it’s just as enjoyable as the rest, but at this point I’m definitely suffering from Gears of War burnout and will have to take his word for it. It’ll at least give us something to play the next time we’re sitting on a couch together.